Tuxedo is not required for the September 30th exemplification. Candidates and sideliners may wear a black, navy blue or dark grey business suit, dark tie, plain white shirt (NO button down collar or French cuffs) and plain black shoes.  No sport coat.  Tuxedo may be worn but not a requirement.  Sideliners may wear tuxedo with baldric or dark suit.

Religious and members of the armed services may wear their clerical garb or dress uniform respectively. NO lapel pins and jewel of office to be worn during exemplification by candidates. You must have your Third Degree membership card with you for the Fourth Degree Exemplification.

Any Third Degree member in good standing is eligible for membership in the Fourth Degree. 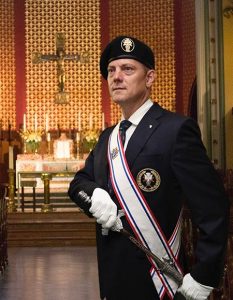 In August 2017, the Knights of Columbus board of directors unanimously voted to adopt a new uniform for the Fourth Degree. The decision was made with the good of the entire Order in mind. While we understand that some members may prefer the old regalia, the supreme master and vice supreme masters urge all Fourth Degree members to put the good of the Order before any personal preference.

The board decided to make this move based on the following factors: