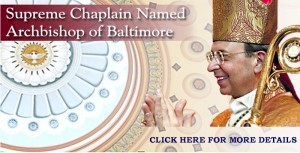 Archbishop-designate Lori was ordained a priest in 1977 and a bishop by Pope John Paul II in 1995, serving as Bishop of Bridgeport, Connecticut since 2001. During his episcopacy in Bridgeport, Archbishop-designate Lori launched several initiatives in support of Catholic education, vocations, Catholic Charities, and evangelization. He has served on several committees of the United States Conference of Catholic Bishops, including the Ad Hoc Committee on Sexual Abuse, where he was instrumental in drafting the landmark Charter for the Protection of Children & Young People. He is also a current member of the Committee on Doctrine, the Pro-Life Activities Committee and the Ad-Hoc Committee for the Defense of Marriage. Archbishop-designate Lori is the Chairman of the newly-created Ad Hoc Committee for Religious Liberty and has been a courageous voice for upholding marriage between one man and one woman, and for religious liberty.