Several state officers and directors attended the 34th Annual Day of Sharing sponsored by the Orange County Chapter Charities.  This event provides free games, music and food to those with intellectual disabilities.

Past State Deputy, Frank Nigro was the Master of Ceremonies, and he reminded everyone to remember our veterans.  Frank told of how moving the 9/11 Memorial is and encouraged people to visit the memorial if they are inNew York.  Past State Chaplain, Father Mel Long gave the opening prayer.

The evening continued with a dinner consisting of salad, rice, steak and shrimp and a great dessert.  The dinner was prepared by Council 3526. Chapter President Dan Lucas thanked the council for the excellent dinner. 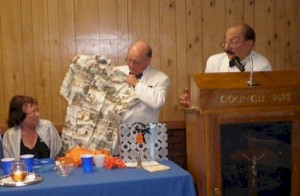 State Deputy, Charlie Clark opened his remarks by stating it was a pleasure to be back in the Orange Chapter, He went on to say the Orange Chapter can be proud of the state leadership that came from the Chapter. Increasing our numbers is always a priority; we have done well to date, but we need to do better. We must be membership focused. As a knight, we believe life begins at conception and continues until natural death. We must continue to support families in our Parishes. The State Deputy concluded his remarks by thanking the Orange Chapter for all their participation this year.