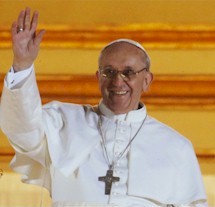 Vatican City, 10 October 2013 (VIS) – “I wish to express my gratitude for the unfailing support which your Order has always given to the works of the Holy See”, began the Holy Father’s address to the Knights of Columbus, whom he received in audience this morning in the Sala Clementina of the Vatican Apostolic Palace, on the occasion of a meeting held by the Order in Rome. He thanked them for their prayers and witness of faith, and concern for brothers and sisters in need.

The Pope described the “Vicarius Christi Fund” as “an eloquent sign” of the Order’s “solidarity with the Successor of Peter in his concern for the universal Church”, made manifest in its daily works. Finally, Pope Francis commended the order to the intercession of St. Joseph, “protector of the Holy Family of Nazareth … an admirable model of those manly virtues of quiet strength, integrity and fidelity which the Knights of Columbus are committed to preserving, cultivating and passing on to future generations of Catholic men”.

You can read more about this audience at these links: