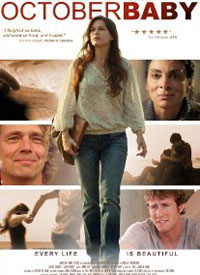 You’ve heard all the raves… and  now it’s YOUR chance to see the hit film that has surprised the box office and melted hearts around the United States!

After opening in nearly 400 theaters last month, OCTOBER BABY heads into NEW territory THIS Friday when 190 new theaters begin showing what Catholic League president Bill Donahue calls, “The most gripping drama ever produced about the central civil rights issue of our time – the right to life.” This weekend is THE time to get a group of friends or your family together to see OCTOBER BABY and celebrate Every Life Is  Beautiful!

Make plans now to see OCTOBER BABY this weekend! The reality with a small, independent film like OCTOBER BABY is that, despite the multiple daily show times, the opportunity to see it in theaters is somewhat limited. With the summer blockbuster season ramping up earlier and earlier each year, screens are at a premium – so we can’t know if OCTOBER BABY will be playing again next weekend.

“The story in October Baby is compelling and inspirational — very funny at points, and deeply moving…. it will help people better understand the gift of life and the power of forgiveness.”
Father Peter West
Vice President for Missions
Human Life International

“October Baby not only has a beautiful message, it is beautifully made…. October Baby is a must-see, masterpiece film for life, so critically needed at this time in history.”
Karen Garnett
Executive Director
Catholic Pro-Life Committee