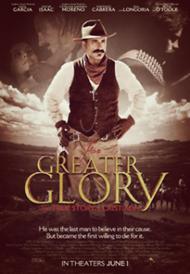 What price would you pay for freedom? In the exhilarating action epic FOR GREATER GLORY an impassioned group of men and women each make the decision to risk it all for family, faith and the very future of their country, as the film’s adventure unfolds against the long-hidden, true story of the 1920s Cristero War ­the daring people¹s revolt that rocked 20th Century North America.

The movie was previewed at the Supreme convention inDenver. This is the upcoming film about the Mexican Revolution that took place in the 1920’s and a movie being supported by the Knights of Columbus

More information on the movie:  http://www.forgreaterglory.com/
Theaters where showing-be sure to verify with the theater:  http://kofcoc.org/GreaterGlory.pdf