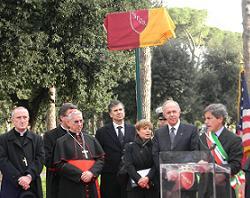 The Knights of Columbus now have a street to call their own in the Eternal City after Largo Cavalieri di Colombo was inaugurated on Dec. 6.  “It is indeed an honor to share this wonderful occasion of the groundbreaking of the Largo Cavalieri di Colombo,” said Supreme Knight Carl A. Anderson at the unveiling ceremony for Rome’s newest street sign.  “For nearly a century the Knights of Columbus and the City of Rome have shared something wonderful—a  relationship that brought together the best of the old and the new worlds, a relationship that has had to overcome an ocean, a language barrier, cultural differences and even a war,” Anderson said.

The naming of the street, which is situated next to Rome’s historic Baths of Caracalla, recognizes over 90 years of charitable involvement by the Knights in the Italian capital.  In the wake of the First World War, Pope Benedict XV asked the Knights to provide activities for the children of Rome. Today, the Knights still run five free sports centers for kids across the city.  The historic bond between the Knights and Rome“is a strong one,” explained Carl Anderson, “precisely because it has been tested and because it has survived each test.”  “It has been able to do this because it has been based on faith, on our common Catholic faith shared on both sides of the Atlantic,” he said.

The inauguration was also attended by dignitaries representing both Church and state, including Mayor Gianni Alemanno of Rome.  “Today is a day dedicated to the Knights of Columbus, a deep friendship binds us to them,”Rome’s mayor told the gathered crowd.  The day was rounded off with a concert in the nearby Basilica of Santa Maria in Aracoeli, featuring gospel music from the St. Thomas More Choir of Washington D.C. The Dec. 6 festivities are just part of a week of special events in Romefor the Knights of Columbus.

Looking ahead to Dec. 12, they will attend a special Mass to mark the Solemnity of the Blessed Virgin Mary of Guadalupe, Patroness of theAmericas, which will be presided over by Pope Benedict XVI. With over 1.8 million members, the Knights have a strong presence throughout North and Central America, particularly in Mexico.

This past Monday, Dec. 5, the Knights attended the unveiling for 15th-century Pope Innocent VIII’s restored tomb, a project funded by the Knights of Columbus. The tomb, which is housed in St. Peter’s Basilica, was created by the renowned Italian Renaissance artist, Antonio del Pallaiolo. It was the first papal tomb to depict a living Pope rather than a deathbed effigy. The restoration project, which was financially supported by the Knights, took nine months to complete.

Cardinal Angelo Comastri, the Archpriest of St. Peter’s Basilica, thanked the Knights for their support and “profound devotion to the Successor of Peter” that inspired the project, in a Dec. 5 statement. He described the restored tomb as “one of the most significant monuments of faith and art in the Basilica” and noted that Pope Innocent VIII was the pontiff “right before the discovery of America.”  As a token of thanks, Cardinal Comastri gave the Knights a bas-relief cast of the figure of Charity, which tops the burial monument. He hoped it would be a sign of the gratitude the Vatican has for the “silent, humble and invaluable contribution” offered by the Knights to St. Peter’s Basilica.