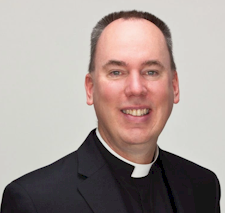 He will  continue to focus on evangelization, including creating experiences, ministries and structures that will bring people closer to Christ.

After serving in several parishes, he was named Episcopal Vicar for Priests in 2012, with responsibility for the care and ongoing formation of the priests of the Diocese of Orange

Bishop-elect Freyer is fluent in Spanish, and he was named the first bishop’s liaison to the Jovenes para Cristo (Young Adults for Christ) movement from 1998-2004. He is currently a chaplain for the Anaheim Police Department.

Orange County comprises 782 square miles in the state of California.  It has a total population of 3,145,515 people of which 1,346,540, or 43 percent, are Catholic.  The diocese, which started with about 330,000 Catholics, has grown to include 62 parishes or churches, 41 schools, three hospitals and care centers and a number of agencies serving the poor. The Diocese of Orange is the 12th-largest Catholic community in the world.

Bishop-elect Freyer has been a member of the Knights of Columbus for over 19 years, and the Knights offer him our congratulations, prayers and complete support.